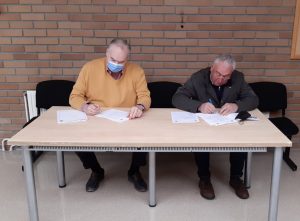 The Jorge Jove Foundation has been involved with the Fundación do Campo Galego since its beginnings, contributing 113.800€ at its foundation.

This materialised in the form of a Barreiros R 545 and the Museum Plan and project. In addition to this contribution, Angel Jove, President of the Jorge Jove Foundation, donated hundreds of objects for all the rooms, especially for the room showing the evolution from the Palaeolithic to the Middle Ages.